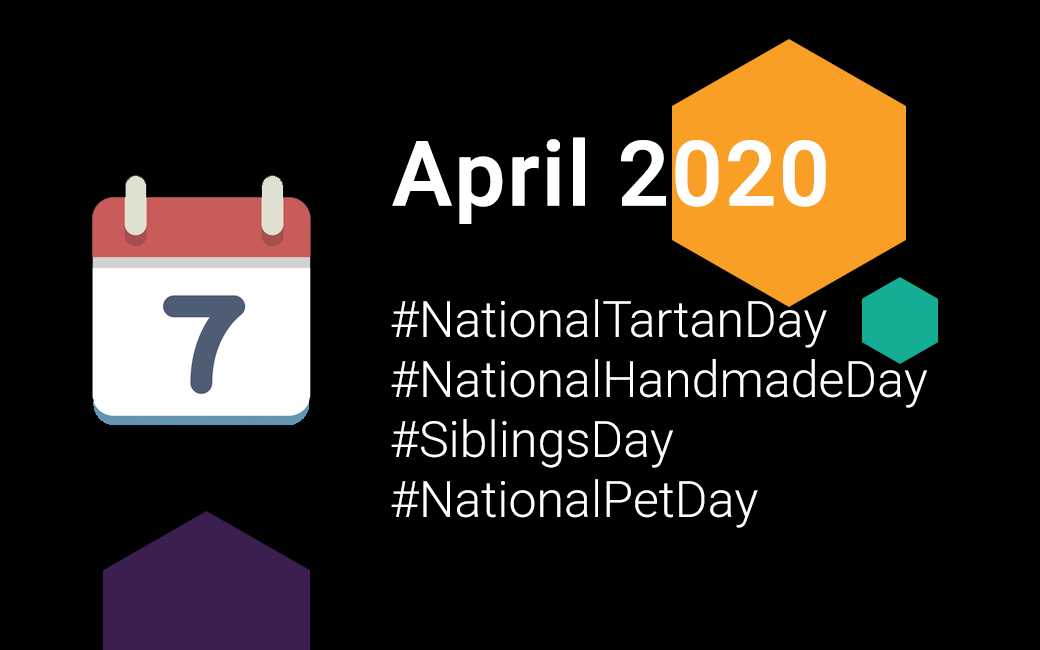 3 April #NationalTweedDay is a day to celebrate the need for tweed. Get sharing your tweed looks on social media and shoppable app stories.

3 April Day two of the Grand National 3 day festival, Ladies Day, is a day full of colour, style and fashion. With thousands of attendees dressing to impress in for the chance of winning the Style Award and with it the big car prize. How will you engage with your customers as many of them take to their mobiles and social media to see the latest fashion being showcased at the event?
#FabulousFriday #LadiesDay

4 April The Grand National is one of the most famous horse races in the world with a TV audience of 600+ million worldwide and forms part of a three-day race meeting held in Liverpool, UK. With more than 150,000 people attending the races, how could your brand engage with those that plan to dress to impress for the event and those hoping to win big during the big race at 5:15pm?
#GrandNational

6 April Originating in Canada, Tartan Day is used to promote Scottish heritage and is also recognised as National Tartan Day in the United States. In New York City, a Tartan Day Parade has been taking place annually for the last 21 years and people will march again on Saturday 4 April this year. Join in on the #NationalTartanDay fun.

7 April Get crafty and encourage creativity for #NationalHandmadeDay

10 April Originating in the US, #SiblingsDay is growing in popularity around the world. Although it is not celebrated on the same level as Mothers Day or Fathers Day many take to social media to share photos. Consider sending a reminder and share some potential gift ideas.

10-19 April The attention of many Millennials and Gen Z will be shift towards Coachella Festival during two weekends in April. As a huge moment in the cultural calendar, Coachella has become a bona fide fashion moment alongside events like the Oscars and the Met Gala. Now dubbed “the Super Bowl of Instagram advertising”, Coachella is a growing significant event for brands and retailers. Almost 100,000 festival-goers walk through the festival gates each day and with the growing reputation as ‘the place to be seen’ millions of posts are being shared before, during and after the event by festival-goers including celebrities and influencers. H&M previously launched a co-branded collection with the festival and introduced pop-up stores on-site at the festival itself (See #HMLoveCoachella).

Suggestion: Think about how you can market your app to the festival audience and also share user based content from your customers at the festival through your own app stories and swipe-to-like features.

12 April Encouraging owners to show their pets some special love and attention and also demonstrating to those without pets that they can adopt pets in need of a home from shelters.

12 April Think outside of the easter egg box and engage your audience in a unique way.

13 April The day after Easter Sunday. Use this day to continue to engage with your customers, keep them in high spirits and maintain your relationship during the continued period of social distancing.

16 April On the day after taxes are due, consumers are encouraged to let go of stress and wear their pyjamas to work. Now social distancing is enforced and many people are working from home, we hope to see people tuning into their video conference tools in their pyjamas. Known as one of the best holiday’s of the year take the opportunity to show off your awesome pyjamas on all of your ecommerce channels.

22 April With global warming and climate control hitting the headlines throughout the last 12 months, #EarthDay is a great opportunity to reach green-minded consumers and put a greater emphasis on your eco-friendly, sustainable and recycled products.

26 April As one of the six major world marathons, the London Marathon is a huge sporting event with a staggering 40,000+ runners taking part in the big race. Have you sponsored a runner and their chosen charity? Are you a sports brand or retailer that can offer ‘Marathon Survival Kits’? Follow an employee taking part in the race and share their runner journey on social media and via your app stories. Almost 800,000+ spectators are expected to descend upon the UK capital in 2020 to support participants from the sidelines. Many will be using their mobile phones to track their friends and family’s progress via the official London Marathon app. This could be the perfect opportunity to engage those customers with outstanding items in your app basket and wishlist to by online and pick-up in-store at a nearby store after the race.
#LondonMarathon | @LondonMarathon

27 April With reduced trading hours on Anzac Day in Australia and New Zealand, retailers using app as their 24 hour shopping channel to continue customer engagement and purchases throughout the public holiday.