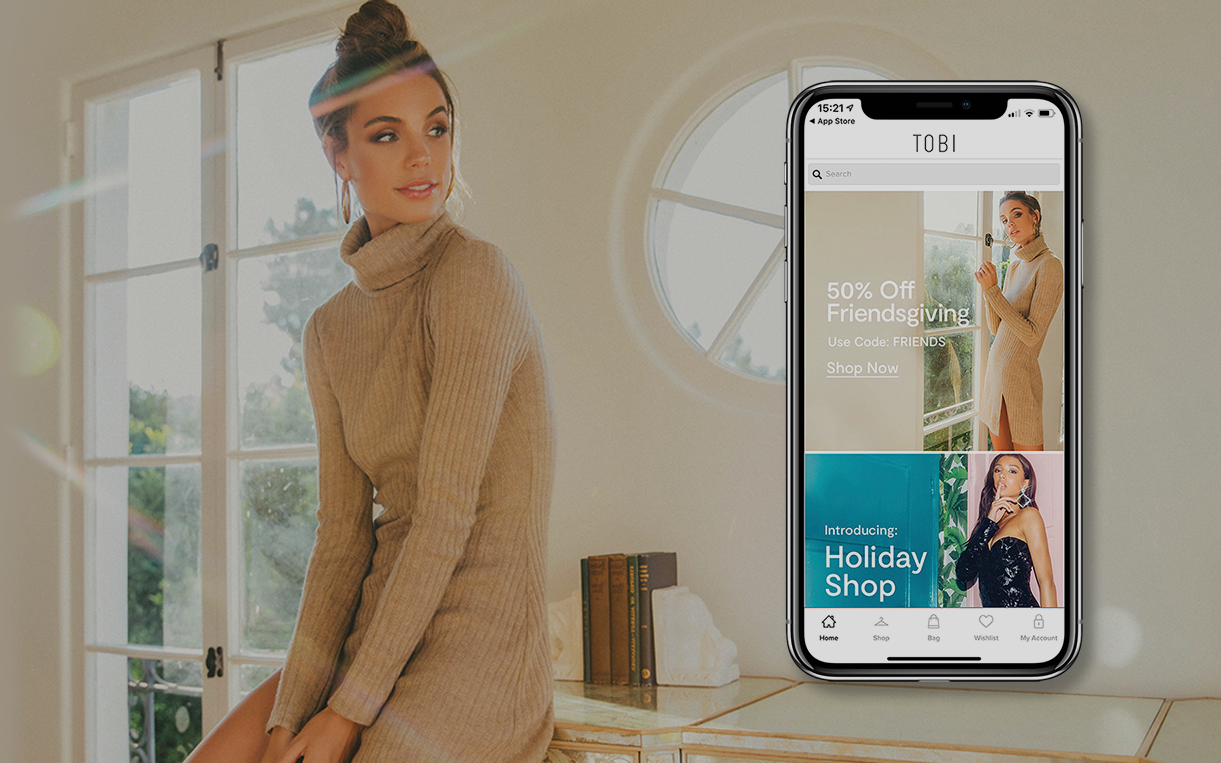 New York – Poq announced on November 13th, 2018 that the company partnered with international fast fashion retailer Tobi to relaunch their mobile app in eight weeks, four weeks ahead of schedule. After just one week on the App Store, the newly redesigned Tobi app, has seen a greater average order value (AOV) of 16 percent and also gains in average shopper sessions: 2.2x, both in comparison the mobile web.

Poq, which recently announced it has expanded operations in the U.S., provides the leading SaaS platform that empowers retailers like Tobi to quickly create highly effective native apps with all of the components – ecommerce, analytics, payment and personalization, and more – needed to create an app that engages customers and builds long-term loyalty.

Based in San Francisco, Tobi sells women’s fashions to consumers in more the 100 countries. The retailer evaluated twelve different vendors, which included app developers and service providers, over a one-year vetting process before deciding to partner with Poq.  Tobi was seeking a partner that had a proven track record in the retail market and really understood the fast fashion business.

Poq met all of Tobi’s criteria for the ideal partner and also shared their vision to prioritize their efforts on building a data-driven business focused on the consumer according to Ken Chan, CEO of Tobi.

“We spent a good deal of time looking for the right partner and found that Poq and Tobi were perfectly aligned,” said Chan. “Choosing the right mobile app platform was a top priority for us. If you choose a partner that doesn’t understand your business or market it could set you back, and as quickly as the fashion retail market moves this could be very detrimental. We thoroughly investigated other options and found Poq to be very knowledgeable about the fashion business and offers a solid SaaS-based platform that includes everything we need to be successful.”

Tobi’s new app leverages the analytics available on the Poq platform to analyze consumer behavior in each of their global markets in order to build a better shopping experience for their customers, create a stronger bond with consumers and strengthen loyalty.

The app relaunch project was initially due to take 12 weeks, but was completed ahead of schedule and now available on the App Store. Ashish Singh, VP of Technology at Tobi said: “working with Poq, has been a great experience, especially since we’re laiunching our app four weeks earlier than planned. The entire app launch project has taken eight weeks in total, which is much faster than we had anticipated. Launching ahead of schedule will mean a significant increase in additional revenue generated, especially in the lead up to the holiday season.”

“We’re thrilled to be working with Tobi to relaunch their app,” said Mike Hann, CCO and Co-Founder of Poq. “As a digital-first fashion brand, Tobi knows that their success relies on the customer experience they’re delivering to shoppers. Tobi is putting the customer first by creating an app with all of the features their customers need to quickly find and buy what they’re looking for. We’re really pleased that we were able to help them relaunch their app ahead of schedule and with better performance, ability to scale and usability features they were seeking.”

Tobi is the latest fast fashion brand to partner with Poq, joining existing customers, such as; Missguided, PrettyLittleThing, Oasis, Urban Planet and made.com which have already launched iOS and Android apps on the SaaS-based platform.

Poq’s platform provides retailer brands with the ability to launch a native, transactional mobile app in weeks, not months. It uses a modular approach so advanced features, such as product reviews and push notifications, can be added gradually to keep customers connected and engaged.

For more information about Poq’s SaaS native app platform and how we can partner to rev up your mobile sales, please contact us.